From the database schema to RESTful API with DinGo

In the previous post I had started writing about data model and code generation and the post coincided with the boot of an open source project called DinGo thought to generate the Go code for a Microservice host analysing the schema of a relational database.

It's a very SQL First approach to write code, so I don't think it should be good for all the projects, but surely there are many applications that can take advantage from this, at least those are using already defined relational databases and want to adopt a Microservice architecture and RESTful API.

DinGo creates a Microservice application starting from a MySQL database schema. Dingo follows these steps during the generation process:

The result you get is a web API application that you just compile and run.

Architecture of the Web App

The application is composed of three layers
View Model it is used by the REST API that receive and transmit data in JSON format.
Data Model is used to communicate with the DAO components and maps tables and views of the database.

If necessary, the templates can be modified according to the developer's requirements, just make a fork of the Dingo project on GitHub.

The generated Web App has a structure similar to this example 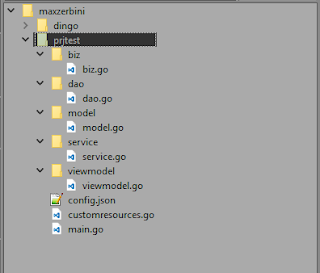 There is also a config.json file that contains all connection parameters, so when the application is running, it can query the database that originated all the code.

It is not mandatory to generate all the application layers, you can control which layer DinGo have to produce by setting the configuration properties SkipDaoGeneration, SkipBizGeneraion and SkipServiceGeneration.

How to customize generated code

All the objects generated by DinGo can be extended by adding custom methods, it's recommended that the new methods are going to be placed in new files, so there isn't the risk of overwriting them by running DinGo again.

There's a special file named customresurces.go that can be used to add new endpoints to the REST API, this file is created only one time and never overwritten and it contains a method that is called at startup.

All the API are exposed using Gin-Gonic, but if you want you can use another web framework. You can produce only the DAO and the Biz layers then you are allowed to use any other framework for the Web App, but in that case you have to develope the exposure layer yourself.

DAO and Biz components can be used also in batch applications that don't need to expose web methods.

DinGo quickly produces code that we should achieve alone and that is often the most repetitive part in the creation of REST API services.
But all that DinGo does is just a starting point of our Web App and then it's up to us to complete the application and comply with the requirements.

maggio 19, 2016
DinGo is a simple Go code generator that is useful to produce Microservice applications starting from the database schema.


PostgreSQL supportedAs I showed in the previous post DinGo produces code reading the database schema and its first version supported only the MySQL database, but now after a not so short and unfortunately not continuous work, finally the PostgreSQL database has been supported.

The current release (2.0.beta) contains all the templates and producers for providing microservices that can operate on Postgres. This DinGo release is still in beta because it requires a few tests and there are also some limitations. Postgres array types are not supported and I don't know if they will be in the future.

febbraio 05, 2016
Yet another Key/Value Storage ?I started developing OVO, my own implementation of a Key/Value Storage, six month ago because I wanted to testdeveloping a projectusingtheGo language. In the past, I had alreadyworkedon a similar project, GetCache, but it is developedwith.Net framework.

I don't thinkthatthe worldlackstheKey/ValueStorage, butfor meitis treatedtoa great gymtotrain myGo. I have realized that this project with the Go language is extraordinarily simple and so I would like to share this experience.